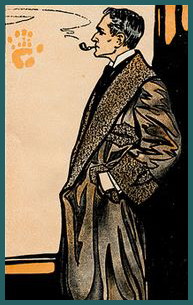 A Friend of John Dillinger
“Johnnie’s just an ordinary fellow. Of course, he goes out and holds up banks and things, but he’s really just like any other fellow, aside from that.”

Norm Crosby
“When you go into court you are putting your fate into the hands of twelve people who weren’t smart enough to get out of jury duty.

Abraham Lincoln
“He reminds me of the man who murdered both his parents, and then when the sentence was about to be pronounced, pleaded for mercy on the grounds that he was an orphan.”

Albert Einstein
“The most beautiful thing we can experience is the mysterious.”

Woody Allen
“Organized crime in America takes in over forty billion dollars a year.  This is quite a profitable sum, especially when one consider that the Mafia spends very little for office supplies.”

O. Henry
“A burglar who respects his art always takes his time before taking anything else.”

Samuel Butler
“In law, nothing is certain but the expense.”

Edgar Watson Howe
“Many a man is saved from being a thief by finding everything locked up.”

Mary Roberts Rinehart (said it first)
“Trouble is my business.”

George Bernard Shaw
“The faults of the burglar are the qualities of the financier.”

Oscar Wilde
“A community is infinitely more brutalized by the habitual employment of punishment than it is by the occasional occurrence of crime.”

Dashiell Hammet /Sam Spade
“I won’t play the sap for you.”

Alfred Hitchcock
“When an actor comes to me and wants to discuss his character, I say, “It’s in the script.” If he says, “But what’s my motivation?” I say, “Your salary.”

Albert Einstein
“One cannot but be in awe when one contemplates the mysteries of eternity, of life, of the marvelous structure of reality. It is enough if one tries to merely comprehend a little of this mystery everyday.”

Will Rogers
“We don’t seem to be able to check crime, so why not legalize it and then tax it out of business?”

Howard Scott
“Criminal – A person with predatory instincts who has not sufficient capital to form a corporation.”

Jerry Seinfeld
“Now they show you how detergents take out bloodstains, a pretty violent image there. I think if you’ve got a T-shirt with a bloodstain all over it, maybe laundry isn’t your biggest problem. Maybe you should get rid of the body before you do the wash.”

Homer Simpson
“Stealing! How could you?! Haven’t you learned anything from that guy who gives those sermons at church? Captain What’s-his-name?”

Steven Wright
“I stayed up all night playing poker with tarot cards. I got a full house and four people died.”

Steve Wright
“Last night somebody broke into my apartment and replaced everything in it with exact duplicates . . . when I pointed it out to my roommate, he said, “Do I know you?”

Steven Wright
” All of the people in my building are insane. The guy above me designs synthetic hairballs for ceramic cats. The lady across the hall tried to rob a department store…with a pricing gun. She said, ”Give me all of the money in the vault, or I’m marking down everything in the store.”

Steven Wright
“If you were going to shoot a mime, would you use a silencer?”

Henny Youngman
“I played a lot of tough clubs in my time. Once a guy in one of those clubs wanted to bet me $10 that I was dead. I was afraid to bet.”