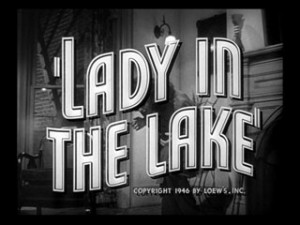 Lady in the Lake

Screen Play by Steve Fisher.  Based on the Novel by Raymond Chandler. Directed by and starring Robert Montgomery.
Most of the dialogue is between the characters of Philip Marlowe and Adrianne Fromsett . In some cases initials have been used to indicate who is speaking.

Philip Marlowe: “I was tired of being pushed around for nickels and dimes so I decided I’d write about murder. It’s safer.”

Philip Marlowe: “Why don’t you quit being cute, Miss Fromsett. The real reason you had me up here is because you’re looking for a smooth operator who keeps his mouth shut and when you read the story you said, ‘Yup that’s my boy,’ he’s dumb, he’s brave and he’s cheap. Am I right?”

PM: “… but this isn’t the ordinary blood and thunder yarn …”

AF: “Please don’t be so difficult to get along with. I need help.”
PM: “Like I need four thumbs.”
AF: “I, um, I wonder how it would be to discuss this over a couple of ice cubes. Would you care to try?”
PM: “Heh heh heh heh heh. Imagine you needing ice cubes.”

AF: “You don’t marry the Chris Laverys of this world. You just pay their bills, lend them all the money they need and forget to ask for it back.”

AF: “Tell me Mr. Marlowe, do you always fall in love with all your clients?”
PM: “Only the ones in skirts.”

AF: “Well if you think I’m going to settle for a cheap detective you’re sadly mistaken. I’ve been pushed around too much in this world.  There’s more than one Kingsby on the Christmas tree, Mr. Marlowe, and I’ll shake one loose yet, don’t you worry. And as for you, you’re off the case. There isn’t any case any more. Now kindly haul yourself out of here and send me a bill for your failure. I never want to see you again.”

Derris Kingsby: “Well you want to facts don’t you?”
PM: “When it concerns a woman does anybody ever really want the facts?”

AF: “Stop getting involved in other people’s murders. Why be a private detective at all?”
PM:  “Why eat? You only get hungry again.”

De Gamo: “How does it feel dying in the dirty middle of somebody else’s love affair?” 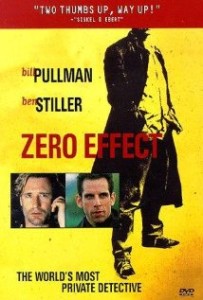 Gregory Stark: “Imagine some opportunistic piece of bird shit has got a way to compromise you.  What do you do about it?  Cause you can’t buy silence.  You can only rent it.  So if someone has something on you, they are always going to have it.  So the cost has no ceiling.  And the fear has no end to it.  That’s why, some knowledge, some information is like a terminal disease.  It’s contagious and it’s fatal.”

Daryl Zero:  “I begin my examination with the method.  I always say that the essence of my work relies fundamentally on two basic principles.  Objectivity and observation or the two obs as I call them.  My work relies on my ability to remain absolutely, purely objective.  Detached.  I have mastered the fine art of detachment.  And while it comes at some cost, this supreme objectivity is what makes me, I dare say, the greatest observer the world has ever known.” 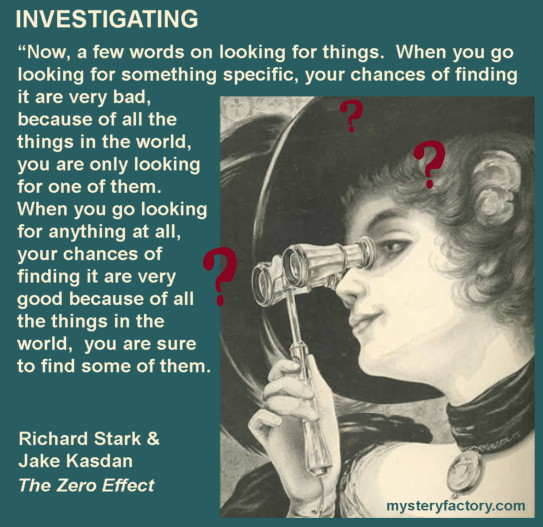 Daryl Zero: “I can’t possibly overstate the importance of good research. Everyone goes through life dropping crumbs.  If you can recognize the crumbs you can trace back,  all the way back from you death certificate to the dinner and the movie that resulted in you in the first place.  But research is an art, not a science. Because anyone who knows what they are doing can find the crumbs, the wheres, the whats and the whos.  The art is in the whys.  The ability to read between the crumbs.  Not to mix metaphors.  For every event there is a cause and effect, for every  crime a motive, and for every motive a passion.  The art of the research is the ability to look at the details and see the passion.”

Daryl Zero: “Passion is the enemy of precision.  Forget the misnomer crime of passion.  All crime is passionate.  It is passion that moves the criminal to act, that disrupts the static inertia of morality.  The client’s passion for this dead woman had facilitated his downfall.  And the blackmailers passion would facilitate hers.  When you live with no passion at all other people’s passions come into glaring relief.”