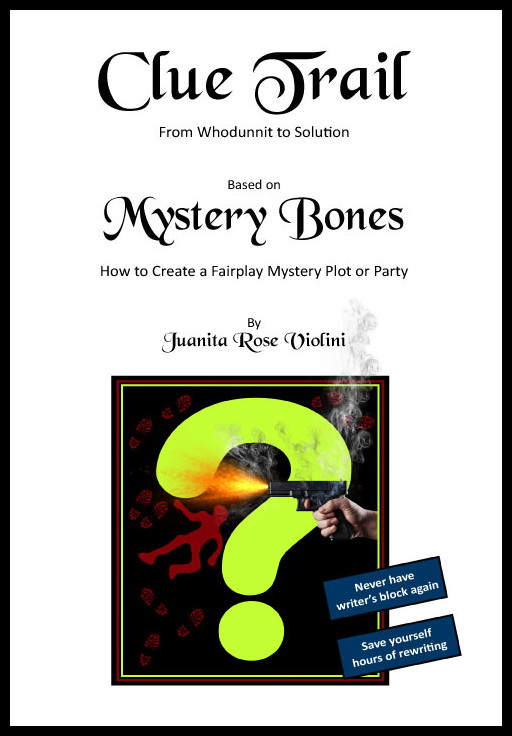 Read CLUE TRAIL and then

Get the Plot Out of Your Head and Onto Paper!

If you have ever wondered about mystery clues:  what kind are needed and how to make or hide them, this book will tell you.

Lists clues of all kinds with examples to help you understand what makes a clue and how to twist it and hide it until all is revealed at the end – AH HA! It was actually obvious all along : )

Part One instructs you on the use of The Mystery Bones Method, which helps you keep track of the plot so that no vital bits of information are forgotten.

Part Two describes, in great detail, the many different kinds of clues that can be used to trick and misdirect your reader or audience.

Part Three is full of Bonus Material on easy mysteries for children, different kinds of mystery scripts and the quintessential Locked Room Mystery.

Part One: MYSTERY BONES
How to Create a Fairplay Mystery Plot or Party
Anatomy of a Mystery: Plot Elements
THE DIRT:  What Happens?
Decide on a Crime
THE BONES:  Motive, Method & Opportunity
Motive:  Why Did It Happen?
Method:  How Did It Happen?
Opportunity:  When Did It Happen?
THE MUSCLES:  Cast of Characters
Characters:  Victim, Suspects, Villain, Detective
THE TENDONS:  Connecting Muscles to Bones
Circle of Suspects Chart
Connections & Secrets Chart
Basic Plot Wheel
Compilation Chart
THE HEART:  What Actually Happened
Extra:  Information about Plotting
THE MIND:  What Appeared to Happen
THE SOUL:  The Clue Trail

READ CLUE TRAIL and find out how to stump your audience / reader and gain their respect and admiration.

and after you have read the book:

Dear Mystery Fans,
That’s how it’s done. Good luck paying attention to the tingle in yourself that tells you what you just read or heard is worth paying attention to. Matching wits against the detective is one of the most engaging challenges there is.

If you find you are constantly figuring out ‘whodunnit’ before you get to the end of the story, maybe it’s time to write your own.

Dear Readers,
This book has been a labour of love for me and I hope it gave you as much pleasure to read it as it gave me to write it.