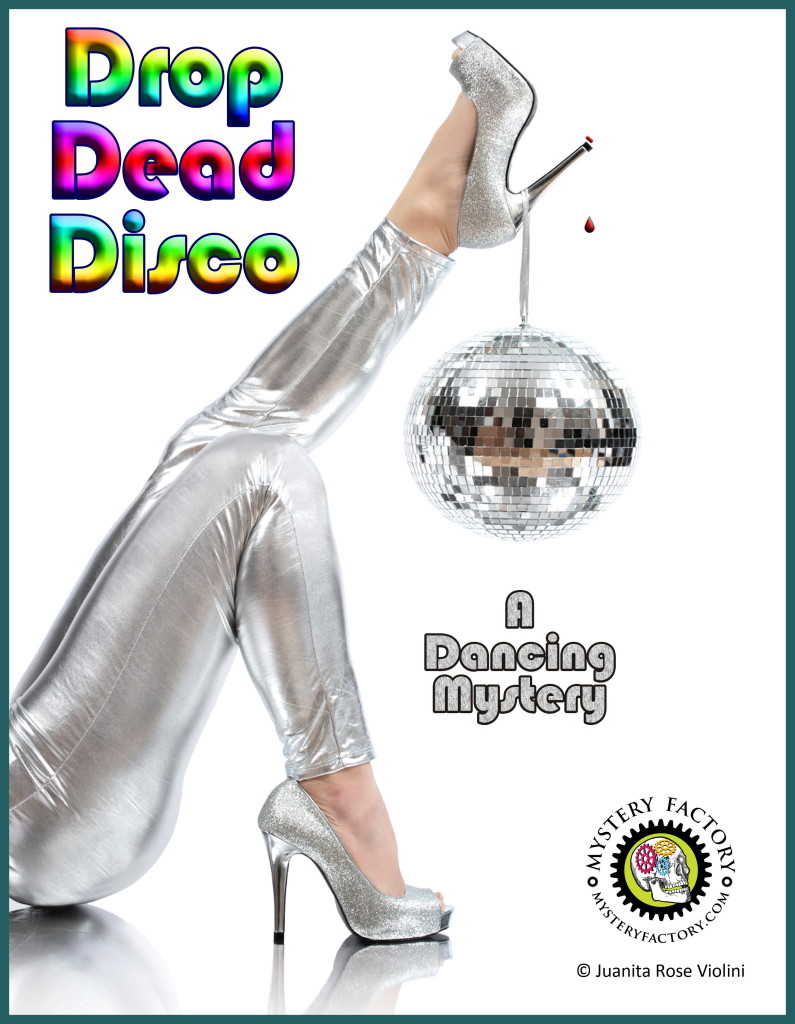 Our disco murder mystery script, Drop Dead Disco, is a funkadelic event with an OCD owner, a paranoid dancing queen and a blind disc jockey all hustling under the disco ball. Requires 3 male and 3 female professional improv actors or eager amateurs, some props and minimal rehearsal time. Director notes tell you how to pull it all together. They are best performed as an improv script, with the dialogue being as a springboard into improvisation, but can also be used as a traditional scripts by memorizing the simple lines. Email us for a sample package.

Dust off your disco duds, poof up your pompadour and get ready to get down at the hottest spot this side of the seventies —  The Drop Dead Disco.

Paulie, Esther & Cotton Blend are putting aside their personal differences and pulling out all the stops to put a glow on your mood ring and a song in your heart. The Blend Siblings have inherited a discotheque. From inception to completion, the only thing the three agreed on was the name:  DROP DEAD. Somehow the business is making money. Lots of money. And tonight they are hosting a huge Disco Dance Contest. But things aren’t as peachy as they seem.

Paulie Blend is a neat freak extraordinaire, and his life is going from bad to worse. The DJ is blind, his girlfriend left him, the Doorman isn’t what he seems, the Mob is moving in, his siblings are slobs, the disco is dirty and he wants everything cleaned up.

Esther Blend has a secret source of income, a secret skill and a secret relationship. She wishes her bothersome brothers, especially Paulie, would drop dead.

Cotton Blend hired the blind DJ and the suspicious Doorman. When not in jail, Cotton is working to turn the disco into a casino. He likes to gamble and wants to be the house because the house always wins.

Donna O’Shea, Disco Dance Queen and Paulie’s angry ex-girlfriend. Donna will do anything to win the dance contest. She’s a paranoid walking arsenal and extremely moody.

Johnny Fever, a mobster and a loan shark and proud of it; with a secret obsession for auctions. Johnny loves Elvis, hates disco and is frequently outbid by Paulie on Ebay.

Stevie Awesome, blind DJ who wants to keep her job and is quick to yell discrimination if anyone interrupts her continuous play and suggests being blind is a handicap to scratching vinyl.

Hugo Grommet, the doorman, is supposed to be hot for Esther but seems to have a little something going on with Donna. He’s very interested in people’s financial information.

This download is everything you need to conduct a full murder mystery event: the Scenario, detailed notes and directions for every scene, suggested dialog to grease your actors’ improv wheels, and plenty of Director’s Notes from our 25-plus years of conducting professional murder mysteries.

Perfect for theater troupes looking for new shows, vacation resorts upscaling their offerings, or restaurants aiming to rule dinnertime, these scripts can be utilized by seasoned professionals or eager amateurs alike. All you really need is a Director with a good sense of timing,  six actors who like to ham it up and a few easy to find props.

Read more about how our scripts work here.

Customer Service is a priority for us here at Mystery Factory.  All of our scripts and parties come with online support. Just contact us if you have any questions about the mystery or need help adapting the scripts or instructions.

Your secure Paypal payment will bring you right to your Download page where the Drop Dead Disco PDF will be waiting for you. We’ll send you an email with the download link, too.

Your purchase is for one-time performance rights.

If you plan on multiple performances, simply repurchase the script from our website for each additional show to cover royalty charges. Thank you for your co-operation and honesty.