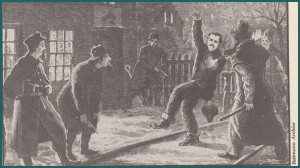 Was the purpose of this secret society of Irish immigrants, The Molly Maguires, to fight oppressive mine owners in the mid 1800s in Pennsylvania – or were they a Death Squad? Killings by the Molly Maguires were as common as slagheaps in coal country. Twelve unsolved murders took place at the headquarters for the Coal and Iron Company in the first 8 months of 1867. Pinkerton’s Detective Agency was called in. Irish newcomer James McParlan, standing 5’7?  was assigned to the case. He got paid $12 a week. 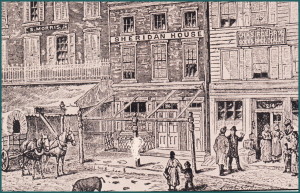 Disguised as a clean-cut Irish dandy, McParlan rolled into Pottsville. A large bankroll in his pocket he headed to the Sheridan, a bar where the Mollies were frequently found. After buying drinks for everyone in the house he then took everyone’s last penny playing poker with them – then he announced “I kill an English bastard in Buffalo. And I play with counterfeit money. But you boyos needn’t worry – my counterfeit is perfect.” The bills, later carefully examined by a bank tell with a magnifying glass, were pronounced perfect. McParlan later commented “Of course it was perfect. It was good US money.”

After two years undercover as Jimmie McKenna, secretary for the secret society, the detective was distressed to find himself named as the leader of a three man execution squad. He hoped for circumstances that would prevent his carrying out of the orders – and he got his wish. The ‘fingerman’ James ‘Powderkeg’ Kerrigan got impatient waiting for their arrival and took care of the execution himself.  Powderkeg later turned stool pigeon and was the only one of the Mollies to walk away from a death sentence. James McParlan went down in history.

Buyer beware is the usual code for online shopping but in February of 2012, 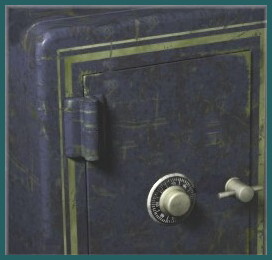 James Labrecque from Bartlett, California, learned the hard way that seller beware is also true; . Labrecque was flipping a combination safe he couldn’t get open. He thought someone might like it for an end table so he checked that it was empty by shaking the thing and, when he heard nothing moving around inside, listed it on Ebay. Someone bought it for $122.93.
The buyer went to be bit more trouble to check if the safe was indeed empty and took it to a welder to cut open.
SURPRIZE! $26,000!!!!!    (That amount is worth breaking the one exclamation point rule). I guess the buyer must have blabbed because before long he got a message from Labrecque saying it would be a nice thing if he shared the spoils. The buyer didn’t see it that way and quoted Labrecque’s selling policy back to him “What you see is what you get, no returns, and no money back.”

Here’s a fantastic specimen of an illustration from the Allan Pinkerton 1880 book Professional Thieves and the Detective. This is facing Chapter V The Murdered Man with the accompanying text:

“Upon its being shown to him, Mr. Kuenzle, with tearful eyes, at once recognized the features of his unfortunate lodger, and thus the question as to who the murdered man was became definitely settled, and the work of tracing the perpetrators of the awful deed, their detection and punishment, was intelligently commenced.

“On returning to New York city, they proceeded to the residence of Mr. Kuenzle, and thence to the apartment formerly occupied by Adolph Bohner, for the purpose of examining his effects in the hope that something would be found that would give fuller information of the young man, furnish some knowledge of his associates, and by that means enable them to form some opinion of the possible cause of his death.”

Now I am assuming the illustration is somewhat accurate, being Pinkerton and all, and have to wonder why the head is in a jar. Is it suppose to be less traumatic to identify just the face rather than the whole body? So much information lost to history…