An Englishman was accused of murdering a friend in Rio de Janeiro harbour. One evening he returned in his yacht with the body of his friend who, he asserted, had been killed by falling from the masthead. An oar was missing, and 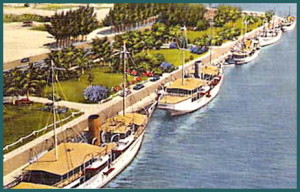 doctors said that the wound might have been caused by such a weapon. And the friends had quarreled two days before.
But it fortunately happened that a passenger entering the harbour on a steamship had taken a snapshot which included the yacht. When developed, a black spot was visible against the sail. This, on enlargement of the photograph, appeared quite distinctly as a man falling from the masthead towards the deck. As a result of this extraordinary coincidence, and on the evidence of the photograph, the accused man was, of course, acquitted.”
Source: anecdotage.com & Henry T.F. Rhodes: Clues & Crimes 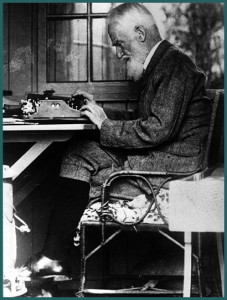 On his ninetieth birthday, George Bernard Shaw, Irish playwright and socialist, was visited by Scotland Yard’s celebrated Detective Fabian. To mark the occasion, Fabian suggested that Shaw’s fingerprints be recorded for posterity.  Incredibly, so faint were Shaw’s prints that no impression could be made.
“Well,” Shaw playfully declared, “had I known this sooner I should certainly have chosen another profession!”
Source: anecdotage.com & C. Fadiman, ed, Barlett’s Anecdotes

After evading New York police for a year, Michael LaRock was finally arrested in

February 2002, after calling them from Auburn, Georgia to brag that he would never be caught. When he called back a second time, he was startled to find Auburn police at his door. Dispatch supervisor Carol Perry later explained how he was caught: “We have caller ID.”
Source: anecdotage.com & “Best Kept Secrets of… FBI Education” (Discovery Channel) 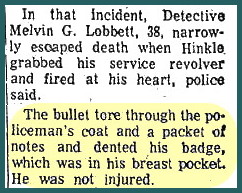 caliber revolver at close range, was saved when the bullet hit his badge which he had dropped into his coat pocket only a moment before the shooting.
Source: Niagara Falls NY Gazette 1969 Oct

A pensioner stole £10,000 from a bank in Peru without anyone noticing. The woman, nicknamed the Silent Grandma by the local press, stole the money from the Sul-Americano Bank in Lima, reports Terra Noticias Populares. She waited outside the bank manager’s office until he came out, then entered, took the money and left within a few minutes. After looking at CCTV footage, the only conclusion the police have reached so far is that the woman seems to be around 65 years old. A police spokesperson said: “She was extremely discreet. We are beginning to think she committed the perfect crime. But we will study the footage over and over to try and find out more about her.”
Source: ananova.com  www.dailytimes.com.pk August 20, 2004

In 1966, the CIA hatched a plan to discover Russia’s Cold War secrets by 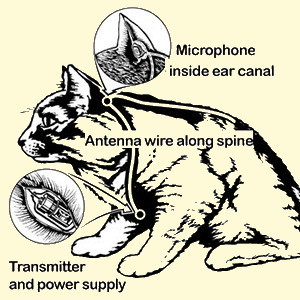 installing bugging devices in a cat. “Acoustic Kitty,” they hoped, would allow them to eavesdrop on secret conversations from window sills and park benches. “They slit the cat open, put batteries in him, wired him up,” recalled former spy Victor Marchetti. “The tail was used as an antenna. They made a monstrosity. They tested him and tested him. They found he would walk off the job when he got hungry, so they put another wire in to override that.” Moreover, when Acoustic Kitty, a tabby with an eye for the ladies, wandered off in search of the opposite sex, more wires were implanted to detect and bypass his lusty urges. After exhaustive testing, the cat, finally ready for his first assignment, was set loose in the street, followed by a CIA support truck loaded with expensive monitoring equipment, and was promptly run over by a taxi cab.
Source: anecdotage.com & 4th November, The Sunday Telegraph; Ben Wicks Book of Losers

Love at all cost

A Romanian man Sandu Gurguiatu, age 47, launched more than 100 lawsuits against his employers because he had fallen in love with Judge Elena Lala. When 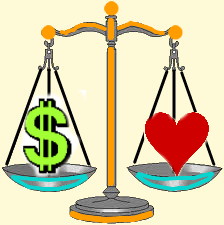 he found out she was married it was the only way he could think of to keep seeing her. He told Libertatea newspaper that it was love at first sight ‘I’d do anything to be around her,’ the bachelor said. ‘I started 100 lawsuits and that’s how I saw her almost every day for three years.’ Then there is the case of Gunther Bergmann, a German so beguiled by the voice of the emergency service operator who answered his call one day that he began ringing the number just to hear her. He was arrested.
Source: www.independent.co.uk/ ananova.com Thursday 15th July 2004)

Shortly before his execution by firing squad, the notorious murderer James Rodgers was asked whether he had any final requests. “Why yes,” he replied. “I’d like a bulletproof vest.”
Source: anecdotage.com

In 2004, a lawyer for Manuel Urbina told a court in the Philippines that 67 kilos 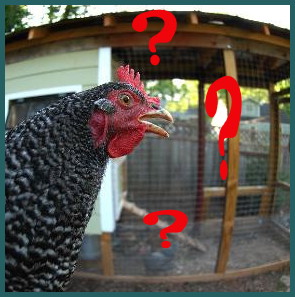 of cocaine found hidden in a chicken cage did not belong to his client. “The drugs were in the possession of a rooster and two hens,” he said, “and the law is very clear that whoever is in possession of the drugs is the one who should be accused.” Prosecutors dismissed the claim.
Source: anecdotage.com

84-years-old Aurel Blidaru was on his way to collect his pension when he hit and ran over an off duty police officer in the western town of Timisoara, Romania. He drove off, leaving the policeman lying in the road without realizing what he had done. Later Blidaru admitted to hearing some kind of a noise but he thought it was from the car engine.
Source: ananova.com Wednesday 17th March 2004) 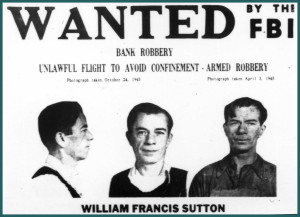 The notorious bandit Willie Sutton was once asked why he had decided to rob banks. Sutton’s reply? “Because that’s where the money is.”
Source: anecdotage.com  & Theodore White: America in Search of Itself