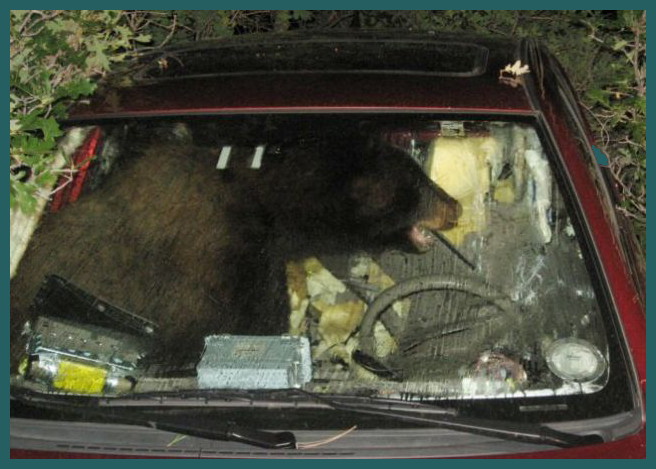 DENVER – A bear got into an empty car, honked the horn and then sent it rolling 125 feet (38 metres) into a thicket, with the bear still inside, a Colorado family said.

Seventeen-year-old Ben Story said he and his family were asleep in their home south of Denver when the bear managed to open the unlocked door of his 2008 Toyota Corolla early Friday and climbed inside. A peanut butter sandwich left on the back seat is probably what attracted the bear, Story said.

It’s not unusual for bears to open unlocked doors to cars and houses in search of food, said Tyler Baskfield, a spokesman for the Colorado Division of Wildlife.

“It happens all the time,” he said. “They’re very smart.”

Once inside, the bear must have knocked the shifter on the automatic transmission into neutral, sending the car rolling backward down the inclined driveway and into the thicket, Story said. The door apparently slammed shut when the car jolted to a stop, he said, trapping the bear inside.

Neighbours had called emergency police dispatchers, and deputies freed the bear by opening the door with a rope from a distance. The bear then ran into the woods.

Story said he’ll need a new car because the bear trashed the interior trying to get out. The bear also left a ‘present’ on the drivers seat. ‘A nice pile, actually’ added father Ralph Story ‘Something to remember.’

Paris robbers tunnel into bank and steal from 200 vaults

The thieves tied up the security guard at a Crédit Lyonnais branch on Paris’s Avenue de l’Opera on Saturday night, before boring through a series of neighbouring cellars to reach the vault, police said.

They spent several hours opening the safes and set the place on fire as they left. The value of the stolen goods is still being estimated, police said. The security guard managed to break free and contact the police, but by the time officers arrived the gang had made off with the loot.

Construction work was going on at the branch, which was due to be fully automated.One investigator described the heist at the Avenue de l’Opera branch as a “professional job”.

The gang entered through the cellars of the neighbouring building, digging through a series of tunnels and at one stage burning a hole into a wall more than 30in thick, to get into the bank which was undergoing building works at the time. When they left, they set the place on fire to remove any trace of evidence, triggering the anti-fire system and flooding the building.

Michel Barnich, a bank customer who believes his two private safe boxes containing family jewels were emptied, said the bank’s security was insufficient. “Two boys were guarding it (when he walked by one night last week). I wondered whether they were homeless people or professional security guards,” he told Europe 1 radio.

News of the heist came two days after an armed gang believed to be French stormed a casino in Basel and broke open cash desks before vanishing into the night with hundreds of thousands of euros. About 10 masked raiders armed with machine guns and pistols carried out the 4am raid on the city’s Grand Casino with what police called “brutal efficiency”.

French media instantly compared the Opera bank theft with the “Spaggiari Affair”, a robbery masterminded by Albert Spaggiari more than 30 years ago in Nice. The Spaggiari gang dug into the vault of a Société Générale branch, spent two days and two nights there and made away with booty worth some 24 million euros (£21 million).  Link to original article.