In New South Wales, Australia, thrill seekers pressed against the glass panels of 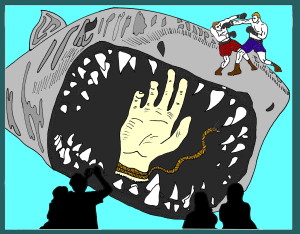 Coogee Aquarium’s shark display as the newly acquired tiger shark writhed in pain and then vomited up a human arm – with a tat of two boxers slugging it out on the soggy flesh. A rope was wrapped around the severed limb.

Police initially thought that the arm belonged to an unlucky swimmer but it was soon revealed to be the limb of  Jim Smith a shady character who ran a sleezy pool hall and had been previously charged for  illegal bookmaking.

Suspects were Reggie Holmes, a successful boat-building businessman and smuggler and his associate, Patrick Brady,  a forger.   Smith had worked dirty deals for Holmes and then made the mistake of blackmailing him. Brady was arrested.

Four days later Holmes tried unsuccessfully to shot himself but the bullet flattened against the bone of his forehead and he was only stunned. Captured by the police he confessed that Brady had killed Smith. The day before the inquest into Smith’s death Holmes was found shot dead in his car. Brady was acquitted and  continued to claim his innocence until he died at the age of seventy one years. 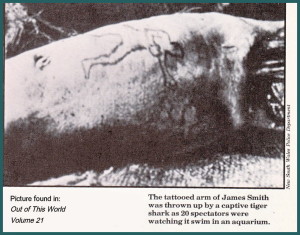 Here’s an interesting coincidence. I drew the picture and guessed what the tat would look like. Then I found the photo of the arm and was happy to see that my guess was pretty good.

Plus some tips from Mystery Factory.
Scared to go in the water?

Check with the Locals. If you don’t want to meet a shark stay out of its way.

WHAT TO DO IF YOU’RE ATTACKED – If you’re being attacked by a shark, go for the eyes and gills. Kill the killer and cook him up.

Shark Steaks
Cube 4 shark steaks, put them in a glass pan and marinade them in: