The moon was down and the lonely buttes along the Clearwater were faintly silhouetted against the sky. …companions were rolled in their blankets around the embers of the campfire a hundred yards from him … one exception was a border ruffian named DC Lowry … his fellow conspirators, James Romaine and David Howard, and sneaked, axe in hand, toward his unsuspecting victim.
As Lloyd Magruder, on his way home with a lot of money and livestock, stood there in the darkness Lowry inched up within striking distance and swung his ax with terrible force. The impact embedded the weapon so deeply, in fact, the killer had to place his boot on the victim’s chest and tug with all his might to free the heavy blade. Silence was imperative, for four others in the little party around the campfire were also marked for murder. Lowry and his accomplices set about their bloody business and in a matter of seconds they had hacked to death two young miners, etc, . The killers left their victims wrapped in their blankets and threw the bodies into a deep canyon nearby. They had search the bodies and taken a total of about $35,000 in gold. 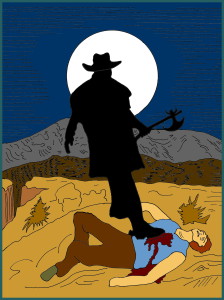 Far away, in Lewiston Idaho, the owner of the Luna Hotel, Hill Beachy, saw it all in a dream and was determined to bring the killers to justice. The night of the crime, Hill watched in his sleep as his friend, Lloyd Magruder, was struck with an axe and the killer put his foot on Magruder’s body to wrench the axe out. He saw the killer’s face.
Magruder was a merchant who had just made a fortune selling his wares to the gold miners at Alder Gulch.  He headed home in the company of  some young miners and four men he had employed. Unbeknownst to him,  those men were escaped convicts.
Near the Bitter Root Mountains, the bandits wrapped the bodies in blankets, and were sent, along with the herd and other evidence,over the edge of a canyon. A hundred miles from anyone, the bandits made off with the gold and seven horses. It began to snow. They thought it was the perfect crime and headed towards Lewiston.
Leaving their horses at a nearby ranch, the gang checked in the Luna Hotel. Hill Beachy was at the desk and he recognized the killer from his dream. The Walla Walla stage coach was due that day and when Lowry went into the Luna Hotel to buy tickets for the trio, Hill Beachy had the disquieting feeling that this was the man he had seen in the nightmare – the wielder of the axe that killed his good friend Magruder. But he was powerless to take action, for dreams make poor evidence in court and at that time there was no certainty that Magruder was not alive and well.
After Lowry and his companions had left on the Walla Walla stage, Beachy heard about the pack animals thay had abandoned at the ranch on the Clearwater. He and the sheriff hurried out there and discovered that in their haste, or carelessness, the killers had left Magruder’s personal saddle and other items, including his revolver, among the gear. Beachy had himself deputized, swore out warrants for the arrest of Howard, Romaine and Lowry and got the necessary requisitions from the governors of Oregon, Washington and California.
He trailed the guilty trio to San Francisco and caught them while they were waiting for their stolen gold dust to be minted into coins. Brought back to the Idaho Territory, they were defendants in the first session of the District court ever held in the Territory, a trial which began on January 5, 1865.
The chief witness against them was a fourth member of the gang, Bill Page, who had taken no part in the murder. After being scared by theatrical performance from Beachy, which included a room with four nooses hanging from the ceiling, Page showed the officers where the bodies had been dumped into a canyon. Examination showed that Magurder had been killed by one terrible blow from an axe, just as Beachy had seen it in his dream, even to the bloody footprint on the victim’s thigh as he pried the axe from Magurder’s body. The accused were found guilty and Judge Samuel C. Parks sentenced them to death. Lowry, Howard and Roamine went to the gallows on March 4, 1865.
They had been captured and brought to justice because Hill Beachy recognized one of the trio as the killer he had seen in his dream.
Source:  Frank Edward’s Strange People
Juanita Rose Violini Almanac of the Infamous