–  In Irvington, New Jersey, a female thief unknowingly tried to pay for her purchases with a credit card that had been stolen from the cashier who was working there. Diane Klos and her boss chased the woman from the store and into the arms of two policeman. Diane was happy to get her credit card back. 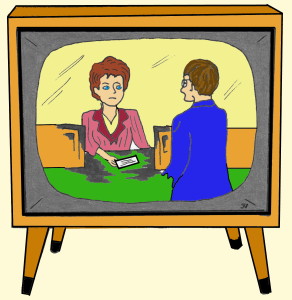 – In the late 1970s, a crook broke into the home of Nancy Hart in Austin Texas and stole a couple of television sets and her checkbook. He later tried to cash a cheque at the bank, however when he presented to the teller – Nancy Hart – he was arrested.
–  In California in 1989, two young men were committing a burglary when they were interrupted by the home owner who flagged down a passing police car. The cops gave pursuit but when the crooks scaled a chain link fence and dropped down on the other side, the chase was over. The tow bunglers had climbed into the grounds of San Quentin State Prison.
Source:  Ripley’s Believe It or Not, Time-Life A World of Luck
Juanita Rose Violini Almanac of the Infamous

On June 3, 1955, Barbara Graham was executed in the gas chamber at San Quentin.  Convicted of taking part in the murder of Mabel Monahan, Barbara swore her innocence up to the end.  Along with four men she had gained entry to Mabel’s house in search of a fortune belonging to a gambler that was hidden there. No fortune was found and when they left, Mabel was dead.       The victim’s purse contained $500 and $10,000 worth of jewellery was untouched.
Barbara maintained her innocence. As the misbegotten mother of three children, she might have stood a good chance for a commutation, a pardon, or even a new trial. But while in prison, Barbara was offered an alibi for $25,000 by a fellow inmate who offered an alibi. and the main evidence against her was that she tried to bribe a fellow prisoner who turned out to be an undercover policewoman tape-recording their conversations. The tapes were played in court. Barbara tearfully explained, “Oh, have you ever been desperate? Do you know what it means not to know what to do?
Knowing she was going to die, Barbara swore that the men connected with her conviction would die prematurely also.
One of Barbara’s accomplices had disappeared and was presumed murdered before the trial.  Two were executed on the same day as herself.  The man who had turned prosecution witness was killed on the Mississippi River when, in a fog, a Dutch freighter rammed the small craft he was riding on.  A man who was in on the plan, and gave evidence but backed out at the last minute, died when he drove into a road obstruction.
The District Attorney in charge of her prosecution died unexpectedly from cancer, the warden of the San Quentin prison was struck dead by heart failure and the judge who sentenced her died abruptly, also from cancer.
Source:  Colin Wilson’s Unsolved Mysteries Past & Present, Clark Howard’s  The TRUE Story of Barbara Graham, www.poeforward.com/mrperfumery/deadgirls/historical/executed/graham (404 not found Jan 24.2015)
Juanita Rose Violini Almanac of the Infamous